In the year 1895 Georgia was spreading her wings, the state was progressing in many areas.  Through the leadership of men like Henry Grady, Georgians were feeling much better about their state than they had in years.  Through this leadership they had staged several magnificent Cotton States Expositions, letting the nation see the kinds of products and the kinds of talents available in Georgia.  It was in the Woman’s Building of the Cotton States and International Exposition that the Biennial Council of the General Federation of Women’s Clubs was held in this year of 1895.

The Elberton Georgia Sorosis and the Atlanta Woman’s Club, both already members of the General Federation, took the initiative of inviting women from all over the state to gather together and consider the advantages of Federation.  Minutes written on October 29, 1896 list sixteen varied organizations as Charter Clubs of the new Federation.  One writer later commented, “The Georgia Federation did not develop out of nebulosity, but was an orderly assemblage of vigorous bodies that came together in 1896 to unite their efforts for humanity.”

Many of those first clubs existed largely for self-culture, and it is a tribute to their leadership and to the individual members that they so soon involved themselves in a combination of study and service, in line with departments of work already initiated by the General Federation.  Georgia certainly provided enough area of service by these dedicated women, with all the problems inherent in making the transition from an agriculturally oriented society to a society that included industry as well as farms… a society that must educate all its children, in rural hamlet, in city slum, or mountain village… a society that must decide whether Woman’s place truly was only “in the home.”
They were women of ability and determination, those who met together to map the course that has been followed these past years, leading and goading on their fellow Georgians to a better state.  The caliber of those present can be understood when we consider the words of the president of the Atlanta Woman’s Club, Rebecca Douglas Lowe, that October day in 1896.

“We, as Southern women, owe a greater debt to our fellow beings than the women of other sections.  We have been the exotics of civilization: reared in the lap of luxury, with more time at our command than ordinarily falls to the lot of women, guided by mothers and grandmothers, not only endowed with superior intellect, but with that graceful tact, which enables a woman of education and brilliance to carry conviction in all she says.” 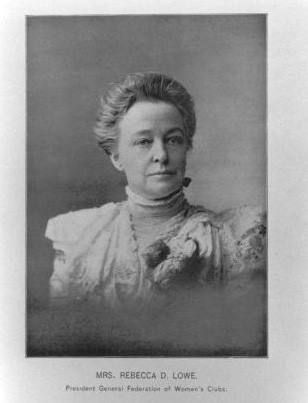 Mrs. Rebecca D. Lowe – President 1896-1897
Mrs. Lowe served as Georgia’s First State President. Through the initiative and determination of Mrs. Lowe and these valiant women, the work for the advancement of education, legislation, welfare, and other phases of civic improvement was given impetus.

During this regime plans were made for broader educational facilities, establishment of libraries, improved farm production, better roads, and equal rights for women.

The motto adopted by this body was: “WISDOM, JUSTICE, MODERATION”

Enthusiasm was manifested throughout the state in this new Federation and several clubs immediately became members.  Equal Rights for Women was presented to the State Legislature in the following resolution:
“Females are entitled to the privilege of the elective franchise, to hold any civil office or perform any civil function in as full and complete a manner as the same can be employed by any male citizen; provided, however, females shall not be liable to discharge military, jury, police, or road duty.”

It was in 1897 that a State Library Commission was created. It was natural that education should be the topic that unified the interest of women from such varied groups as the W.C.T.U., D.A.R., the Fulton County College Loan Association, the Free Kindergarten Association, and others.  For they all felt that progress in any area would only be forthcoming as the result of education.  In the 1890’s Georgia had no compulsory school attendance law, made no provision for books for rural children, provided no public libraries.  In the first Georgia Federation president, Mrs. Rebecca D. Lowe, insisted that education could be made more practical for the vast majority of Georgia students.

Just one year after organization, the State Federation’s Educational Committee conducted a survey of Georgia’s educational conditions, including library needs, and published a brochure covering the entire education system from Kindergarten to State University.  The reforms suggested in the brochure were so well received, many other states used it in their formative educational work.

One of the suggested reforms involved the introduction of vocational training into the curriculum of Georgia Schools.  But no Georgians were trained to teach these subjects.  So, Georgia clubwomen secured scholarships and paid the expenses for two years of the first young Georgia women trained to teach Home Economics and Manual Training, with the agreement that they should each come back to Georgia to teach.  The clubwomen established a traveling library, with books and articles available to any club that would pay the shipping cost; and individual clubs were urged to collect books to serve as a library in their own community.